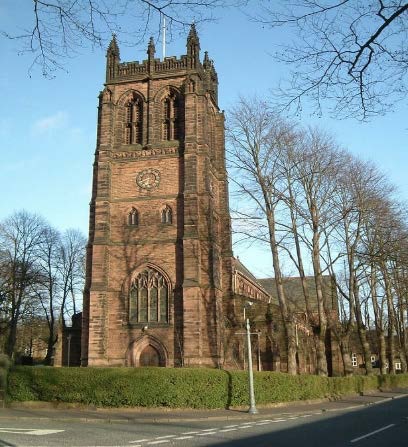 Consecrated in 1876 the church of All Hallows was built as a place of worship for the residents of the large houses that were “springing up” between Wavertree and rural Allerton thus creating a new suburb of Liverpool. Amongst its first parishioners were several young men who would play football for Liverpool Ramblers during the early years of their existence. Also connected to this location was Alexander Percy Eccles.

His interest in sport was nurtured during the time he spent at Uppingham School where the Headmaster, Edward Tring, encouraged his pupils to learn the game played under the rules of the Football Association. In 1880, Percy Matriculated to Cambridge University where he attended Trinity College along with Egerton Stewart – Brown and James Heald. All three of these Cantabs would become founder members of Liverpool Ramblers.

When Percy Eccles first appeared in The Ramblers side, he occupied the position of Goalkeeper and assisted them in their first attempt to win the Liverpool Cup.  He was present in the side that took part in the semi-final game against an Everton side who were beginning to attract a small number of followers to their ground on Stanley Park. The Public-School men, having home advantage, decided to stage the game on the sports ground belonging to Liverpool College in Fairfield.

The match took place on the 23rd of December 1882 in a howling gale. The home side, with elements in their favour, led 1-0 at the break. The local journalist, who covered the game, claimed Ramblers then faded in the second half and trailed 3-1 as the final whistle approached. Darkness had covered the ground when Percy, with his juncture crowded by spectators, was beaten once again as Everton won the tie 4-1. Percy Eccles continued to keep goal for Ramblers when they made their move to Liverpool Cricket Club, but he was now inclining his sporting interests towards the game that was played at this location during the months of summer. 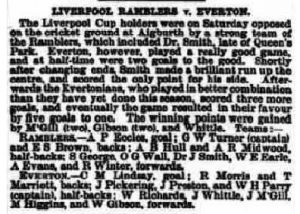 While a “Freshman” at university, Percy had represented his college at cricket alongside fellow Liverpudlian AG Steel who would later play for England. He also shared the field with the honourable R N Hawke who would later captain England while playing for Yorkshire. In 1884, having been awarded a BA, Percy left Cambridge and returned to the family home in Roby where he took up a position within the family firm. During the months of summer, he opened the batting for the local Huyton Club.

On the 31 of July 1890 Alexander Percy Eccles married Anne Nicholson at the church of All Hallows. His bride, the daughter of a late Shipowner, then lived at “Oswald Lodge” on Woolton Road and was a neighbour of The Ramblers first secretary, Percy Bateson. The couple purchased a house called “Elmside” on Allerton Road and Percy – re-joining AG Steele – transferred his cricketing allegiance to the nearby Liverpool Club at Aigburth. He was by then a member of Royal Liverpool Golf Club at Hoylake and the following amusing article, dated 6th of May 1895, appeared in a local publication.

This branch of the Eccles family contained 4 children when they re-located to the 13-acre Caldy Manor estate in 1907 and spent around £40,000 improving the property which, as a Care Home, can still be admired to-day. Percy spent the rest of his working days with the family firm, whose Liverpool Office was then located in Bixteth Street, until his retirement. He had by then purchased a second home, with the name of “Cartre” on the Westminster Park estate in Chester. This former goalkeeper for Liverpool Ramblers was residing at this address when he died, the 15th of June 1932, and was buried at the Grange Cemetery in West Kirkby.