The Sporting Life of a Liverpool Rambler 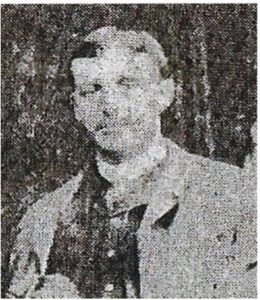 Pictured here on the original 1883 Ramblers team photograph is Edward Vivian Rayner who personifies the love of sport displayed by the business community of Victorian Liverpool. Named after his Liverpool born Father – who belonged to a family firm of Stockbrokers and Ship Owners – he first saw the light of day on the 26th of August 1862. His Mother, who was of Scottish decent, was named Isabella and Edward was her second child. Sadly, she passed away April 1866, just 18 months after the birth of her fourth child Oscar and was buried in Toxteth Park Cemetery.

The 1871 census discovers the family living at 34 Oxford Street where the children are under the supervision of a Governess.  The 1881 census finds young Edward now employed in the family business having previously attended Eton College. He is also involved in the spearheading of the association game in Liverpool.

On the 5th of November 1881, the name of EV Rayner appeared in the ranks of Bootle Football Club when they took part in the first FA Cup tie to be played on Merseyside. Also on the team sheet is his close friend Percy Bateson. The game took place on the Bootle Cricket Ground where the home side defeated the Blackburn Law Society by 2 goals to 1. When the young lawyers had left the field, Edward and his teammates immediately took on Preston North End in a Lancashire FA Cup tie and held them to a 1-1 draw. Bootle, unfortunately, made no further progress in either competition. Nevertheless, during the season, several other public schoolmen had joined Edward at Bootle and next season, as suggested by Percy Bateson, they formed Liverpool Ramblers AFC.

On the 11th of February 1885 Edward Vivian Rayner married Eva Mary Hazelhurst and the occasion delighted the inhabitants of Runcorn. The bride was the daughter of the late Charles Hazelhurst – whose family had founded the Runcorn Soap and Alkali Company – and she resided at Halton Lodge (later to become Runcorn Town Hall.) The route to the church was decked out in bunting and garlands while hundreds of people filled the pavements as the bridal procession – which consisted of 18 horse drawn coaches – passed by on its way to the parish church. The bride came down the aisle on the arm of her brother – who was dressed in his army uniform – to be greeted by the groom who in turn was accompanied by several groomsmen. These included his brother Oscar and fellow Ramblers Ernest Baxter and Percy Bateson.  When the ceremony was concluded the party returned to Halton Lodge where the wedding breakfast awaited them. The newlyweds later left for London.

On their return home they “set up” home at Huskisson Street in Liverpool which was convenient to the family business in Old Hall Street. Edward made the occasional appearance in The Ramblers colours but soon began to concentrate his sporting interest on Greyhound coursing. In 1892 he purchased 2 female dogs one of which – Utopia – reached the semi-final of the Waterloo Cup. In 1896 the Rayner family purchased a second home at Clarendon House near the small North Yorkshire town of Middleham where the Head of the Household expanded his sporting interest. Having purchased a string of Racehorses he placed them to be trained by Matthew Dobson Peacock who owned a local stud farm known as The Manor. Edward had several successes on the turf, but his greatest moment came in 1903 when his horse Kilbride carried off the Ayr Gold Cup.

According to the 1911 census the official residence of the family – which now consists of 2 Sons and 2 Daughters – is at Holly Lodge in West Derby where they employ 9 servants. The Head of the Household declares his occupation to be that of a General Produce Broker. In 1916 one of his dogs again reached the semi-final of the Waterloo Cup but, with war now raging in Europe, his 2 sons had now been “Called to the Colours”. His eldest boy Edward enlisted in the 3rd Battalion of the Cheshire Regiment and survived the conflict, but his younger son sadly did not. 2nd Lieutenant William Logan Rayner, who served with the 13th Battalion, Kings Liverpool Regiment died on the 28th of October 1918 and his death was registered at Leyburn in Yorkshire. He was buried in the cemetery adjoining the church of St Mary & St Alkelda in Middleham. He is not recognised as “War Dead” by the Commonwealth War Graves Commission which indicates he must have been discharged from the Army. His Parents however, clearly thought his premature death was caused by Military Service and applied for him to have a Silver War badge. This memorial plaque may be seen in his parish church. 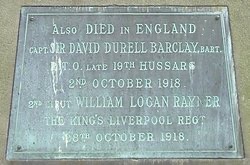 It also indicates that Captain Sir David Durrell Barclay – the 12th Baronet of Pierson in Ayrshire – had died at Middleham around the same time. A professional Soldier he ascended to the rank of Captain with the 19th Hussars and fought in Egypt before taking part in the Sudan campaign of 1884.  Along with his local born Wife Letitia, he retired to a 70-acre estate, The Grove, and held an Army Staff appointment at the time of his death.  Edward Rayner later purchased this property.

The Liverpool Rambler spent the rest of his days in North Yorkshire where he continued to breed Greyhounds and Racehorses. He became involved in the running of the local: Fire Brigade, British Legion, Horticultural Society and was president of the Wensleydale Football Association. In 1931 his dog Robin Wood reached the semi-final of the Waterloo Cup but by then its owner was suffering from serious ill health. Edward Vivian Rayner died on the 29th of December 1932 and was buried alongside his son William at Middleham. His last resting place is pictured here. 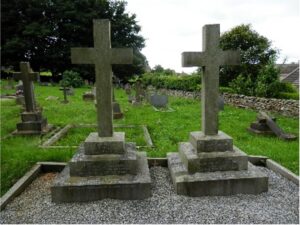